If you've never heard about Civilization, you are in for quite an experience. Because, even though it can be debated whether this game or that game is "the best game of all times", where most of the argumentation will depend on the player's taste and personal preferences, nobody can deny that, if nothing else, Civilization can with full justification be called "Mother of All Games".

Simply, if you consider the areas of human endeavour that different games cover, you can't escape the conclusion that Civilization - Covers it All.

And yet, with all this content, it is not that complex to play compared to other games. Of course, it is complex, it has to be, with Everything crammed into it, but the ratio of complexity-to-content is pretty much the best there can be.

Of course, Civilization is not a Total Simulation. Every game has to be an approximation of things it is simulating. Some things always have to be left out. But for some reason, even though similar games and clones have appeared over the decades since Sid Meier's original saw the light of day, it seems that Civilization is still the only one that retained an "equal spread" over all aspects of human existence (see the checklist above) and also kept a relatively simple interface and a perfectly balanced learning curve to keep people interested for infinite replays.

And of all the versions, especially comparing to the commercial ones, Freeciv kept the straightforwardness of Civ 2 and Civ 3 and continued to build on that.

Anyway, enough of propaganda, if you are here to check what this game is about, time to lay out some basics so that you know what you are getting into.

There are two main levels of the game:

1. Military and non-military units roaming the terrain, responsible for expansion and conquest

2. Cities that are, at a first glance, less spectacular to manage, but it is them that you have to operate well to win the game

Firstly, a huge majority of types of units are military and they do what you would expect military units to do: they attack and defend, conquer and hold terrain and that part is simple. We will not go into details here because you will learn technicalities in a more steady pace once you start playing. But the mechanics are simple: you move a unit into a tile occupied by enemy unit, combat occurs and, most of the time (if the attacking unit is not Bombarder class), one of them dies, end of story. Of course, different units have different attack and defense values, some units have specific capabilities and you will learn more about it in the in-game help as you go through the game.

Various units can perform various tasks, such as Build City or Irrigate or Build Road. Most of those tasks have shortcuts, but all should be available in the menus on the top of the screen, so be sure to familiarise yourself with them. 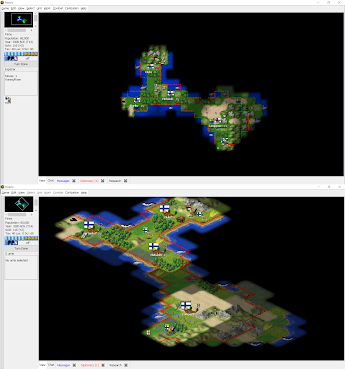 You can choose how you want the game to look. Two main tilesets are shown above. There are also user-made tilesets and we can recommend  Hans Lemurson's Roundsquare.

As we said, cities make or break a game. The more you have them, the more powerful you are.

Cities work the terrain around them producing three types of "commodities" from the tiles: Food, Production and Trade.

Food is accumulated in the city granary (not to be confused with the building of the same name that you need to build for it to have effect). Once granary is filled, city grows by one.

Production is used to construct city buildings (if you are new, use in-game help extensively) or units. There are also Wonders as special and unique buildings that give powerful bonuses, either just to the city or, sometimes, to the whole nation.

Trade is collected (some is lost to corruption) and divided into Tax, Science and Luxuries.

Tax fills the national coffers with gold that you will mostly use to maintain buildings or accelerate production. Sometimes money will be needed to upkeep units to, and occasionally you may want to grab the opportunity to bribe enemy units or cities, if possible.

Science is accumulated in the national research pool. Once you collect enough, a new technology is developed.

Luxuries are usually not needed in the early game, but later on, as cities grow, you may have to use it to make citizens content or happy in order to avoid a revolt. You can also quell revolts by putting military units into cities, but it only works in earlier governments; once you reach Republic or Democracy, this will no longer be possible.

Distribution of Trade between these three is controlled by a simple menu. You can also pull population from working tiles around the city and employ them as Taxmen, Scientists or Entertainers to produce more gold, science or luxuries. 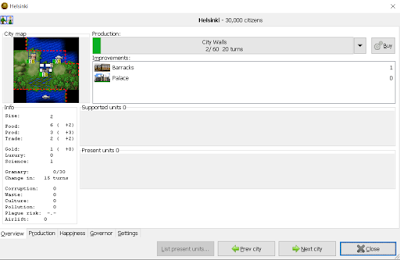 Picture above shows a typical early city outline. Number rows such as "310" and "202" represent population working the terrain around city and bringing home Food/Production/Trade. (In case you were checking and math doesn't add up: Palace adds 50% to production, but only in some early governments.)

Strategy tip: The backbone of your initial strategy should be to expand as much as possible. Sonce cities represent power, you should build as many cities and conquer as much terrain as possible. All other actions should support this: military units should defend your Settlers and cities, workers should improve terrain around your cities. The more cities you have, the more science and money you get.

Science and techs are the backbone of your nation's development. New technologies you discover allow new buildings, units and governments that improve your overall situation. Except the initial ones, all techs are organised into a tree, having one or two prerequisites and most of them leading to new technologies. The tech tree can also serve as an alternative help source because by right-clicking on a technology, you get a hypertext help window about everything this technology makes possible, including units, buildings and other things. The image below shows roughly half of the available techs in the default ruleset. 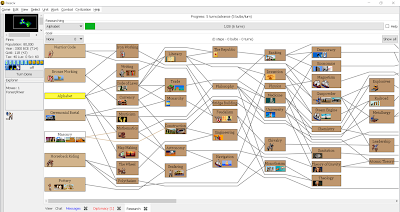 All Civ games, including Freeciv, are playable as single-player. To do this, simply go to Freeciv.org, download the latest version of the game and install it. However, it is always more fun to have company and for multiplayer games check the Community section on this site and join one of the multiplayer games. Of course, one doesn't exclude the other and you probably want to try both, but either way, having people to talk to, exchange advice, strategies and opinions always makes it more interesting.

This was an indeed brief introduction to how the game is played. Of course, the devil is in the details: we haven't even touched diplomacy (which is relatively simple in single-player, but can get unfathomably complicated in multiplayer environments), terrain details, math stuff and different variants (rulesets) of the game. But all those things go beyond basics and it makes more sense learning them as you play; of course you are going to be terrible in your first few games, but we hope you will find the whole experience interesting to learn more and more, to become a great leader and to lead your nation to progress, might and glory.

More details to watch for

Since this is not a full tutorial, we will not go into mechanical details of the game, but will just note a few things that are not obvious, you need to be aware they exist and check and learn as you go:

* If you are playing with other people, don't miss the in-game chat! It is not the best piece of software you've ever seen and LT people usually use Discord, but it is the first line of communication in the game and people may want to tell you something, like "let's avoid war"
* Early governments force a penalty on terrain yield; you will want to advance to a more developed government or build wonders that remove the penalty
* In default Freeciv, excess food is wasted once a city grows, while Trade and Production are accumulated
* Units that achieve veteran levels can be significantly stronger than their default combat values, don't squander them

Popular posts from this blog

JOIN HERE (*click*) Thanks to Sketlux, a new scenario game is being prepared on Longturn.net. After "German Unification" and "Voyage to America", in a bit over two months, when all preparations are done, players will have the opportunity to engage in and reenact the Russian Civil War of 1919.   In the words of the Scenario Maker: This scenario will be based on the Europe scenario (classic giant map) but only encompass the territory of the Russian Empire in the borders of 1917. The playable nations will be all states that declared independence during or immediately after WWI (e.g. Estonia, Finland). Other nations that can be played are forces that played a role during the Russian Civil war (e.g. White Armies, Soviet Union, Green Armies) or the Expeditionary Forces (e.g. USA, France). All players start with cities or at least units like in the case of the Expeditionary Forces. This game will be based on LTX but with many more scenario game units. It will also
Read more

By Corbeau
On January 21st, another project by the Freeciv21 Team came to life! If you have been restricted from playing Freeciv because of installation issues, or simply didn't want to bother with installation, or weren't able to because of any kind of restrictions on your computer, you can now play through a client that is directly derived from QT (usually downloadable from Freeciv.org) using only your web browser, the experience is identical (or should be and will be). Technically speaking, this is a WASM Freeciv client ready for use, open to all and ready to receive gamers. Non-technically speaking, this is a browser Freeciv client running on standard (native) Freeciv(21) server, just like the downloadable Freeciv.org version. The most revolutionary thing here is the architecture that completely follows the native client-server relationship with things being calculated where they are supposed to be calculated. For the end user this means experience with as little lag and client mi
Read more

By Corbeau
LT63Sim is scheduled to start on Thursday, April 29th . (As always, slight delays are possible.) The game will be using the Sim ruleset , whose goal is running a more realistic simulation of human history than is the case with other Civ rulesets. There is an immense number of new features and the whole ruleset manual, together with the "philosophy" and "Basic strategy", can be found here . Main features:  * "Quickstart": Tribal government is designed to create a quicker beginning than any other ruleset currently in play * A continuous spectrum of strategies : the bigger your empire, the greater the power, but also more problems with maintaining infrastructure and technological progress * Spontaneous migration , allowing less control over your city populations, but allowing city diversification into large centres and smaller suburbs, towns and villages, making infrastructural and demographic management more important * Tech upkeep: the more cities
Read more